I see my fair share of theater, ranging from way Off-Off Broadway experiments to big money productions on the Great White Way. And while I don’t always come away with universally positive reactions, I have never quite encountered the complete sense of bafflement that Richard Foreman’s “Idiot Savant,” currently at the Public Theater, inspired in me.

This is not to say that I did not enjoy the play. Watching Willem Dafoe on stage in an intimate space for 80 minutes is pretty much a win-win situation. Add in a talented supporting cast, fantastical set design and an enthusiastic audience, and the ante only rises.

No, it was more that I left my seat feeling like perhaps I just wasn’t smart enough for the work I had just witnessed. If asked, I couldn’t provide a plot summary, a description of the various characters or even a general statement on what the play was about. It had been an experience with a capital “C,” that much I could say. But it was hard to form coherence out of the strobe light flashes, pregnant pauses, dialogues consisting of sentence fragments and farcical props like a giant spider, a slew of variously-sized fake ducks and bows and arrows. Which, undoubtedly, is part of the point. After all, Foreman — who is perhaps best known for his “Threepenny Opera” — has been challenging and seducing theatergoers for decades with his experimental, unconventional creations.

Not content to just let my fuzzy interpretation ride, I sought help from one of the production’s actresses, Alenka Kraigher, who plays Marie.

WWD: In his Playbill statement, Oskar Eustis [The Public Theater’s artistic director] says he defies anyone to give a synopsis of a Richard Foreman play. That being said, how would you describe “Idiot Savant” to a prospective theatergoer?

Alenka Kraigher: A collection of artistically, highly concentrated ‘mind-flashes’ from the subconscious of a nonconformist brain that can be funny, creepy and frustrating at the same time. Like seeing a surreal horror movie that can make you laugh, yet in an undertone conveys a certain terror in human existence.

WWD: Were you very familiar with Richard’s work when you signed on?

A.K.: I did my research, but I had only seen his previous play, “Astronome: A Night at the Opera,” which I found mind-blowing.

WWD: What made you decide to take on this play?

A.K.: I heard Richard works with actors in a completely unique and extremely demanding way. I was very curious. It was a great experience.

WWD: When you first read the script, what was your initial reaction?

A.K.: I thought: Wow! How do you stage this? There must be something hidden behind all these beautiful, melodic sentences, that remind me of so many things, yet seem to make no sense. What could it be? The script was one big intriguing mystery to me.

WWD: How would you describe your character? Who is she? And how would you characterize her relationship with the Idiot Savant?

A.K.: Marie is a delicate, frightened, fairy-like creature who experiences sudden bursts of primal and unconscious desires. She questions who she is in the play and keeps failing at trying to get in control. She senses the Idiot Savant might hold some answers, but then again, getting an answer might be even more troubling than not getting one.

WWD: What would you say has been the most difficult thing for you as an actress? And the most rewarding?

A.K.: The most difficult was standing on stage for hours and hours while Richard and Heather [Carson, the light designer] meticulously changed the light cues, almost a second at a time. The most rewarding was discovering a very unique approach to theater and acting. The way Richard directs actors goes beyond logic at times, mixing different acting techniques and turning everything around. It was a profound study of all the elements of theater.

WWD: What do you envision as the ideal audience take-away from Idiot Savant?

A.K.: To leave the auditorium questioning themselves about theater and life basics. 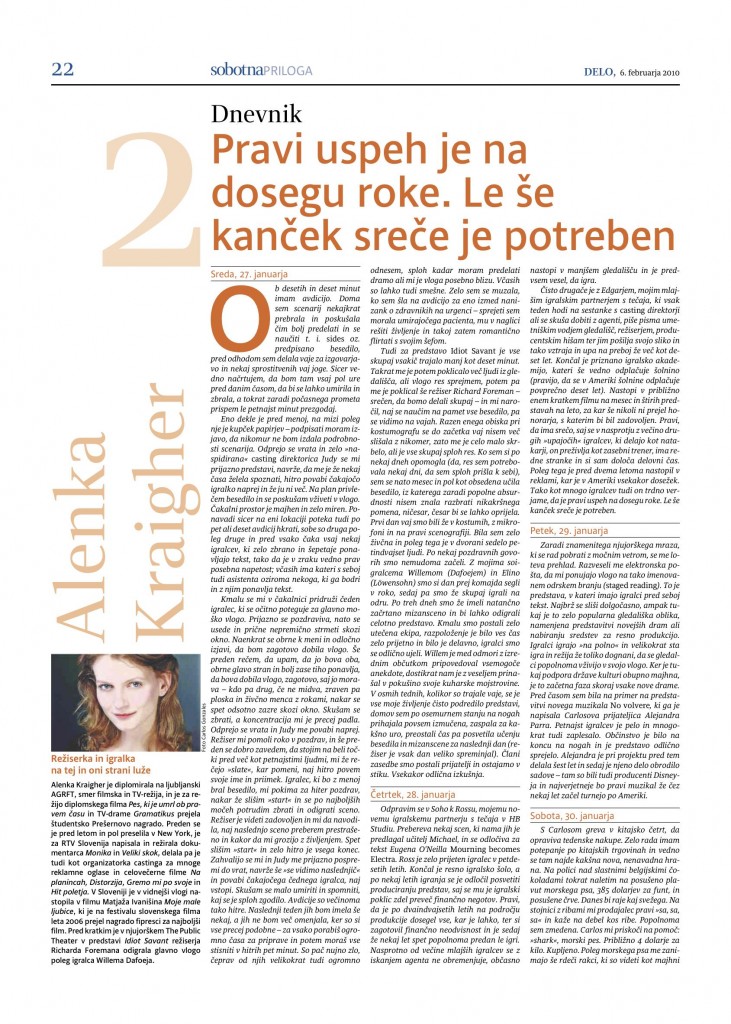